That’s obviously not the only thing going for the company’s latest workout-friendly wearable, but its relative cuteness is surprisingly important here. After all, it directly affected the components Samsung used here, not to mention the overall experience of living with the Watch Active. And at $200, it’s also relatively inexpensive for a fitness-focused Samsung smartwatch.

I mention all this because cheap and charming can be a powerful combination for wearables. Just look at Fitbit and its highly rated Versa: Thanks to its blend of exercise smarts and attractive design, that wearable almost single-handedly helped the company swing into profitability. It’s not hard to look at the Watch Active and think Samsung is aiming for similar success, but we’ll need more time to see exactly how worth this thing is. In the meantime, though, my first day with Samsung’s Galaxy Watch Active has left me with mixed impressions.

To Samsung’s credit, the Watch Active is arguably the sharpest-looking wearable it has ever made. That’s obviously a subjective call, and some of you probably enjoyed the big, masculine aesthetic the company embraced in earlier models. (Here’s looking at you, Gear S3 Frontier.) Still, the Watch Active is cute, clean and stylish in a way Samsung’s other fitness devices just aren’t — it’s elegant enough that it’s as well-suited to a night out as it is a punishing session at the gym. Its cuteness, however, is partially a function of its small size, and that means Samsung has had to make some compromises. 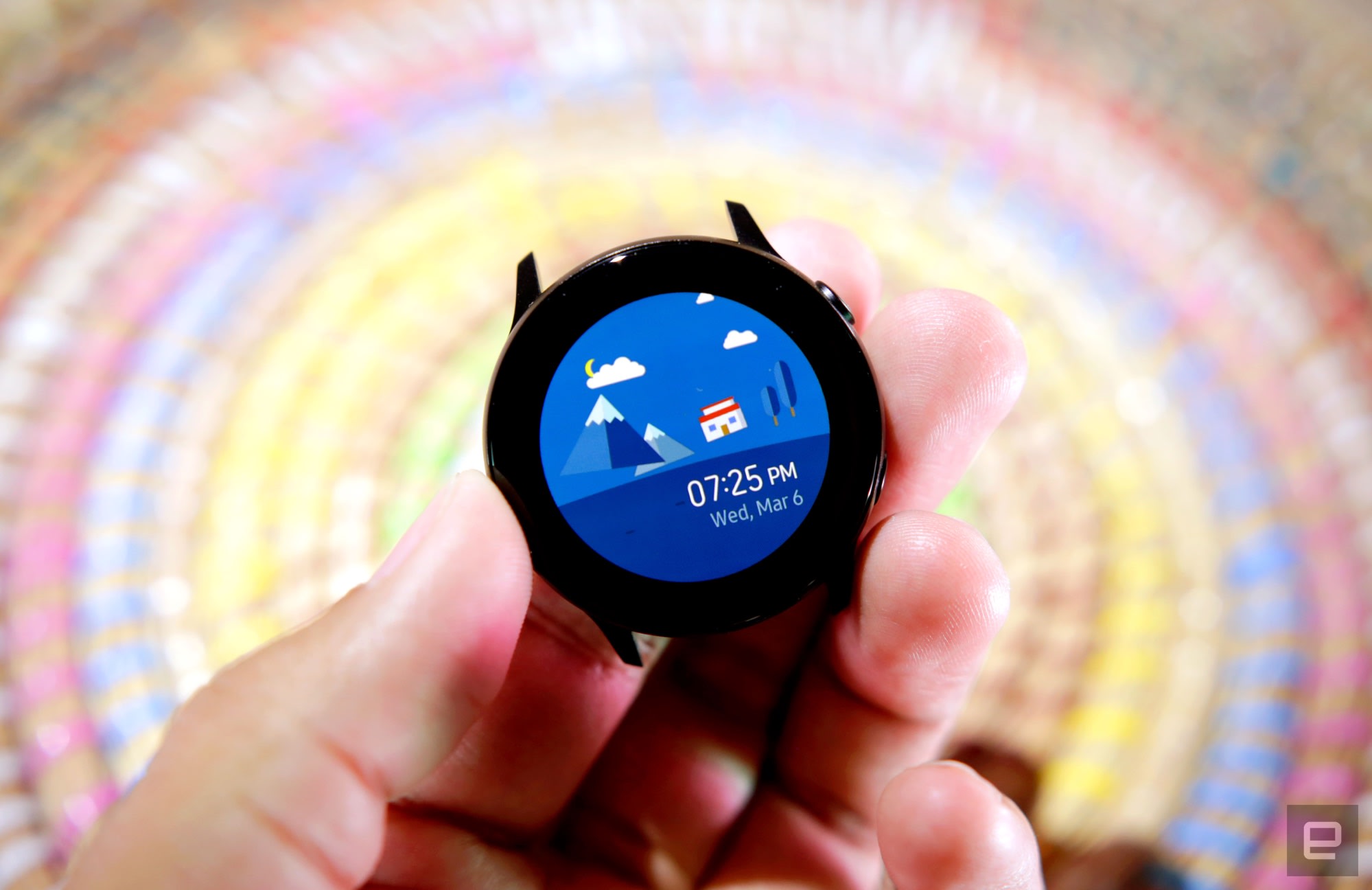 First up, the screen. I’ve always gravitated toward Samsung’s bigger smartwatches because my eyes are terrible and they need all the help they could get. The 1.1-inch display itself is plenty bright and readable, even under the harsh sun, but it’s bounded by some hefty bezels. And while the round panel isn’t much smaller than the one found in the 42mm Galaxy Watch, I still ran into some trouble nailing some of the interface’s touch targets. It doesn’t help that, for the first time in years, Samsung ditched its clever, rotating bezel for navigation. It was easily my favorite way to interact with a smartwatch, because it made scrolling through menus and options incredibly fast. Presumably got the axe to keep costs down. Oh well.

Battery life is also a concern. Samsung says you can squeeze up to 45 hours of use out of the Galaxy Watch Active’s tiny 230mAh battery, but even at this early stage, that seems pretty unlikely. I popped the Watch off its wireless charging disc at around six in the morning, went on the least pleasant jog of my life, went to work, and triaged a few notifications from my wrist. By around 8PM, I was hovering just below the halfway point. To me, that day was actually pretty light. I didn’t use the Watch to stream music while running, nor did I have its always-on screen enabled. Here’s hoping this performance evens out over time, but for now, I’m pretty wary of Samsung’s claims. At least you can charge it by plopping it on the back of your Galaxy S10.

As a fitness tool, though, the Galaxy Watch Active seems more than capable. On a basic level, its step tracking abilities were roughly in-line with my own mental count, and it returned the heart rate measurements that were usually one or two BPM off from the Fitbit Versa Lite. Of course, Samsung hopes you’ll do much more than just walk around wearing an Active. As with its predecessor, the Active can track 39 different exercise types for maximum granularity, and it can automatically detect six kinds of exercises in case you forgot to launch workout mode yourself. It’s still farfrom perfect, though.

The idea is simple enough: The Active more-or-less knows what specific exercises “look” like in terms of motion data, so when you’re performing actions that match those patterns for a while, the watch assumes you’re exercising and logs the workout. The problem is, I’ve noticed the Active assuming I was working out when I was doing anything but.

Here’s a good example. I’m one of those people who gesticulates pretty wildly when I talk, and shortly after I finished shooting an Engadget Today video, the Watch Active cheerfully chimed in to tell me what a great workout that was. If only, Samsung. This happened to me yet again a few hours later while engaged in an animated conversation with a coworker, and yeah, still not working out. Thankfully, the Active knew better than to try and classify it as anything but “Other” but the watch still tried to give me caloric credit I didn’t earn. In fairness to Samsung, though, this isn’t a problem unique to the Active — last year’s Galaxy Watch did it sometimes too — but it is worth noting if you’re a stickler for accurate workout data.

Beyond the traditional workout stuff, the Active features the same sleep tracking smarts we’ve seen from Samsung before. (That said, you might be setting yourself up for disappointment if you choose to track sleep with the Active instead of charging it overnight.) Even Samsung’s oddball stress management feature is back, and while I haven’t been able to thoroughly test it yet, it can’t be worse than the inconsistent mess I found when testing the Galaxy Watch last year. Hopefully the company’s tie-up with relaxation app Calm means you’ll actually be able to use this wearable to clear your head and ease your heart.

Lest you assume Samsung hasn’t pushed the wellness envelope much since the standard Galaxy Watch launched, there is one big new feature to note. The company worked with USCF on an app called My BP Lab, which will allow you to use the Watch Active to measure your blood pressure without a cuff. The thing is, it’s not actually ready yet — the app works fine on phones, but Samsung says support for the Active won’t go live for another week.

For now, at least, the Galaxy Watch Active seems like a stylish, capable wearable for people who want more out of a fitness tracker than just a step count. Its specific blend of size, design choices and software, however, still feel a little less than ideal considering the competition. Who knows, maybe I’ll be proven wrong — you’ll have to stick around for our full review to find out.

How to build a real-time todo app with React Native

How to build a Chrome Extension with React JS

The magic of the “this” keyword in JavaScript

ABOUT US
IT World is news, web developers tools, mobile, technics website. We provide you with the latest breaking news and videos straight from the IT industry.
Contact us: office@it-world.xyz
FOLLOW US
© 2019 Design by Agencija Grupa
MORE STORIES
Gadgets